To many, computer programming seems an arcane topic, particularly when first introduced to it. Students learn variables, constants, conditionals, control flow, and numerous other topics. What is often lost – especially in these neophyte to guru in twelve weeks or less boot-camps – is what actually underlies all the arcane symbols comprising a computer language.*see note below

“Computer science is no more about computers than astronomy is about telescopes.”
Edsger W. Dijkstra 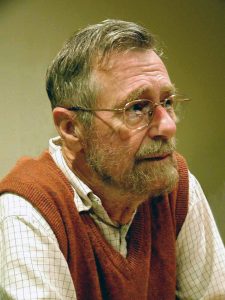 Computer science, and by extension computer programming, is about problem solving. By itself, a computer is a particularly dumb conglomeration of silicon, wires, and aluminum. It does nothing but store and transport electrical charges from one location to another internally. It is not until a human, through his or her intellectual labors, harness the flow of the charges to perform some task that a computer does anything particularly interesting.  But getting computers to do something interesting require a systematic approach to performing tasks. Every step must be specified in detail and you must ensure not to overlook steps. You must devise a detailed procedure for the computer to follow to perform a task. That is computer programming’s essence: write procedures that dictate how a computer solves a  particular task.

Computer science is the science of computation. How to get computers to solve problems. The math behind pushing the boundaries of what computers can and cannot do is staggering. But this is the theoretical side to computer science. Consider the practical. A computer language is a set of instructions that humans can write to have a computer perform tasks. But as computers are dumb, those instructions must be explicit and accurate. Writing accurate instructions to perform a task require an accurate underlying algorithm.

Webster’s dictionary defines an algorithm as “a step-by-step procedure for solving a problem or accomplishing some end especially by a computer <cite here>.”  Here’s a humorous, yet insightful, video clip from “The Big Bang Theory” illustrating an algorithm.

A clip from “Terminator Two: Judgement Day” provides another more graphic, yet still humorous, example of an algorithm.

In the above clip, the Terminator uses one or more algorithms to obtain clothing. From visual input, he calculates the attributes of features such as height, weight, and foot size to determine the probability a person is a match. If not a match, he moves to the next person. If a match, he persuades the person to remove his or her clothes.

Computer programming is formalizing algorithms into a form usable by a computer. Algorithms are the solution to a task/problem. Code is the instructions performing the algorithm. The following video by “Art of the Problem” on YouTube introduces algorithms.

The above video assumes some knowledge of looping and conditional logic. However, if you are reading this as a supplement to “Think Java” then this post only assumes familiarity through chapter four of the book. This chapter introduces you to methods that do not return a value. You have not been introduced to methods that return values, looping, or conditional logic. So let’s consider another algorithm, purposely ignoring concepts not yet covered in “Think Java.”

Consider the task of boiling water. The following steps outline a basic algorithm.

The steps seem easy enough, but remember, computers are very dumb. These instructions are not explicit enough. For instance, consider the sub-steps involved in obtaining a pot from the cabinet.

But of course, computers are too dumb to even understand these instructions. For instance, consider the sub-steps involved physically perform the first step, first sub-step.

But even still the computer is clueless, as these sub-sub-steps remain ambiguous. We could continue to break the steps down to the most fundamental level. For instance, instructions on how to move each muscle when walking to the cabinet.

Understanding muscular contractions is obviously taking our algorithm to a level too fundamental to be useful. Thankfully, algorithms build upon previously solved algorithms, which can be reused as a “black box.” But before considering algorithm reuse, first consider how to decompose an algorithm into more manageable sub-tasks through a process called functional decomposition.

Functional decomposition is explained well by the following.

There is a downside to our rush to formalize all problems into formal algorithms. We use computers to decide everything from product

Sometimes a computer’s formalization leads us to eschew common sense. And think about this last clip. Politics aside, I leave you with this vision of our near future. It’s not science fiction, it will be reality within a few decades at most.

* This post is particularly directed towards students that have completed chapters one through four of the book “Think Java.” by Allen B. Downey & Chris Mayfield.Note in this post I specifically avoid discussing repetition and conditional algorithms, preferring to keep this post simple. I also avoid discussing Object-Oriented analysis and design. Here, I focus on simple algorithms and functions. It is my personal belief, that understanding simple functional programming helps transition to Object-Oriented programming.

This site contains tutorials on programming topics, essays of technology related subjects, and information for the information technology student and professional.